The Navarre startup Muxunav develops technology that allows any vending machine already installed to be digitized. 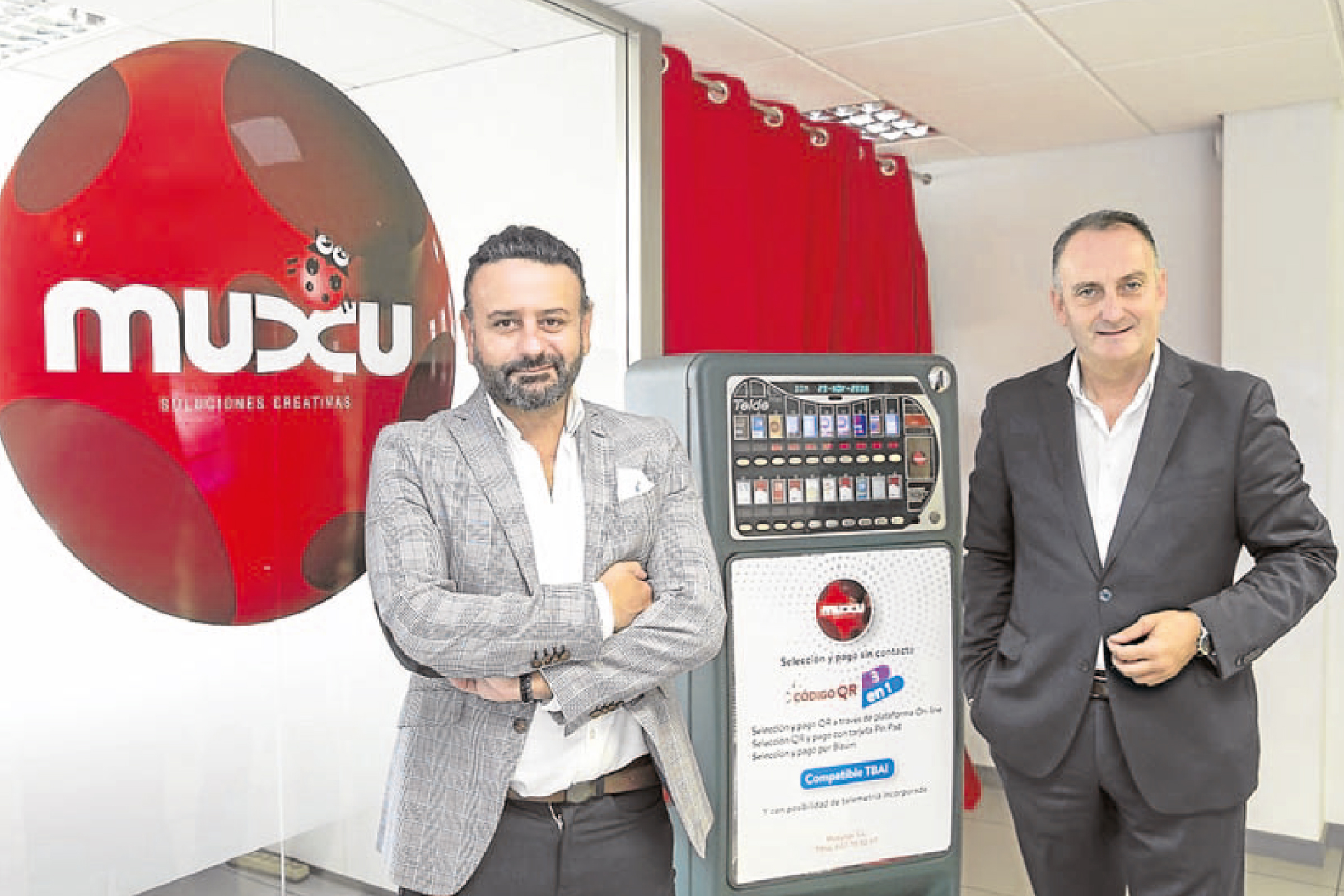 Antonio Torres and Roberto Ducay pose next to a digitized vending machine thanks to Muxunav technology. JESUS GARZARON.

The firm only needs to replace the panel that houses the buttons and connect the vending machine to the Internet so that it can be fully remote.

In Spain there are more than 520,000 vending machines. Some are very modern and are even equipped with ‘contactless’ technology, which allows you to pay with your mobile, but the vast majority are light years away from so much modernity. They have a panel with a series of buttons, each assigned to a brand, and that’s it. To go from one model to the other, the companies dedicated to its exploitation had only one option: scrapping the old one and replacing it with a state-of-the-art one. An investment that the Navarran company Muxunav, one of the participants in the next edition of B-Venture, can make much cheaper by digitizing the machines already installed.

In 2013 they began to replace some of the push button panels with others with luminescent or even moving labels that attracted more attention and, therefore, generated higher sales. That helped them to get to know the sector and, above all, to see how far a large part of the machines were from the possibilities that technology offers today to improve their management and even provide more comfort to the customer, such as facilitating the selection and payment without Contact. So they were encouraged to go from offering a product that only improved marketing to another that also made it cheaper to run.

If it works don’t change

«In Europe there are more than five million installed, of which 90% are many years old because with them it happens like with cars: if it works, you don’t change it. So to perform checks like whether or not any of them have changes or need to replace one of the products they offer, it is necessary to send someone to the place where it is installed. However, if the machine had an Internet connection, finding out all this and even changing the prices could be done from a mobile”, explain Antonio Torres and Roberto Ducay, company managers. This adaptation, far from being a nuisance, is a matter of just a moment. You don’t even have to move the machine. “In most models on the market, the installation and configuration of the small module that houses the CPU – the computer – can be done in ten minutes.
You don’t have to touch anything other than the label holder. Whoever sees the machine will only notice that this label holder has been replaced by a screen holder”, they clarify. This minimal change in appearance is also important because, thanks to it, the firm can round off its offer to the machine manager. In addition to immediate access to all the information generated by each one of them, it can offer you an increase in sales because digital screens allow you to “present products in another way”. “In some cases we are talking about increasing sales by up to 32%,” they say.
Hence, the firm has begun marketing the system in Austria and Germany. «There we had good contacts and as soon as they met the
product they sued us because, at the moment, their legislation does not prevent the machines from including advertising claims for tobacco”, they point out.

Muxunav is now preparing to launch a second generation of digital label holders, which will now allow the user to pay with their mobile. «By the end of the year we will launch the new models, which already incorporate the possibility of making contactless payments thanks to a QR code that, once scanned, gives access to a payment gateway that includes Bizum. With this we would not cancel the usual payment system, so that those who do not want to use the smartphone can use cash as usual. We also want that through that same code you can make the selection of the product from the mobile. Today, apart from a few exceptions in coffee machines, the most modern machines offer selection or payment, but not both”, they underline.

At the moment the company is focusing on the managers of tobacco and beverage vending machines, which are the ones that have these honeycombs with ‘brand’ buttons. But in the future they will also adapt their technology to those that have a numeric keypad in which the user dials the number assigned to each product. “That is something that can also be done with a screen, which can also serve as a support to offer information about each of the products. It could serve to indicate, for example, if a certain ‘sanck’ is suitable for coeliacs”, they add.

For the development of these new functionalities, as well as to reinforce marketing, the company will present financing needs of 700,000 euros to B-Venture. The event, which will be held at the Palacio Euskalduna on October 19 and 20, is organized by EL CORREO with the sponsorship of the Department of Economic Development, Sustainability and the Environment of the Basque Government, the development agency SPRI, the Provincial Council of Bizkaia and Bilbao City Council, and the collaboration of the Port of Bilbao, Banco Sabadell’s BStartup, BBK, Laboral Kutxa, CaixaBank and the University of Deusto.

Prepare the machines for Ticket Bai

Although with different deadlines in each province, next year the obligation to issue all invoices with TicketBai will come into force, which represents an imminent business opportunity for Muxunav, whose system already allows you to send billing data in that format. «The regulations say that vending machines have to be advanced and right now in the Basque Country there is none like this.

All the automatic sales companies are going to have to do something themselves, so we have already entered the test platform of the provincial estates to guarantee that our solution effectively okay”, Torres and Ducay point out.